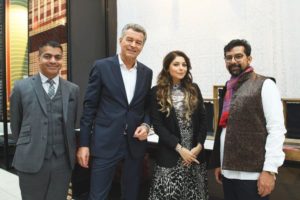 Her visit to the exhibition, held in Frankfurt from February 8 to February 12, brought a celebrity face to Ambiente’s 2019 partner country of India.

She said: “It’s my privilege to be a part of one of the leading trade fairs of the world, Ambiente, and be invited to represent India on an international platform.”

Kanika was given a guided tour of the show which included a viewing of the partner country presentation and visits to several leading Indian and international exhibitors.

She was particularly interested in handmade pouffes and cushions from the Indian company The Rug Republic, and products from manufacturers Guaxs and Scholtissek.

Another element which impressed her was the partner country presentation. Running under the heading ‘Hand Make’, the designer Ayush Kasliwal demonstrated the importance of traditional craftsmanship for India today as well as its contribution to the wider world. Kanika was also thrilled by a special exhibition called ‘Stepwell’ in the foyer of Hall 9.0. The show, which was curated by Sunil Sethi and set in an interactive environment, focused on India’s typical products and production methods. It was essentially based on the idea of a northern Indian ‘stepwell’ with its sustainable, centuries-old technology and simple design.

Kanika commented: “It was an incredible experience at Ambiente. It’s almost like coming back home away from home when all these beautiful artists and the whole Indian culture came together in a different country. At the fair everything was beautifully put together. I was most happy to see real arts and crafts here. This is what we as Indians want to represent to the world. I was very proud to showcase our country at Ambiente.”

The next edition of Ambiente will be held from February 8 to February 12 2019. The annual event is organised by Messe Frankfurt.