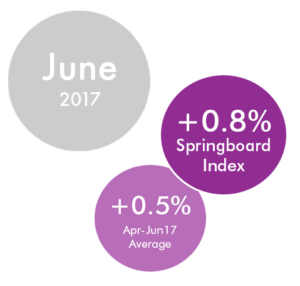 Footfall in June was 0.8% up on a year ago – and ahead of the three month average of 0.5%, according to the British Retail Consortium (BRC) and Springboard.

Covering the four weeks from May 28 to July 1, the BRC-Springboard footfall monitor for June reports that high street footfall rose 0.9% on the previous year’s rate of -3.7 %.

Seven regions saw footfall growth in June. The fastest growth was in the East of England, which has now seen seven months of consecutive footfall growth.

This was followed by the South-East, Wales and Greater London, which saw growth of between 1% and 2%. Footfall in Wales has now grown for six consecutive months.

“High streets and retail parks saw solid growth, as shoppers headed out to renew their wardrobes and purchase other seasonal items.

“Most parts of the UK benefitted from these sun- fuelled shopping outings, with the East of England especially witnessing brisk growth.

“Amidst economic uncertainty and mounting concern over the inflationary squeeze on household incomes, sustaining growth in shopper footfall will be challenging – more so as retailers seek to convert that into an improved performance at tills.

“And while retailers step up their efforts to keep prices down for their customers against rising input prices and inflation, the Government can help alleviate the cost pressures in the immediate term by sticking to their commitment on business rates reform to deliver a system fit for purpose in the 21st century.”

Springboard marketing and insights director Diane Wehrle added: “The uplift in footfall in June, compared with a -1% drop in May, can be attributed to a number of factors.

“The weather was far better than in June last year, which encourages consumers to visit bricks and mortar destinations, particularly in external environments such as high streets and retail parks.

Also, in recent months, we’ve seen rising footfall in the hours after 5pm, illustrating the trend in consumer behaviour towards leisure trips after retail trading hours. In June, however, the better weather supported the increase in footfall during daytime hours.

“The cumulative impact of both these factors accounts for the weaker footfall performance in shopping centres compared with high streets and retail parks.”

BRC is the UK’s leading retail trade association. It represents multiples and independents that sell food and non-food products online and in-store.

Springboard is a provider of automated customer counting services, delivering solutions across a range of customer-generating environments, from high streets, shopping centres and retail parks to conference, leisure and entertainment venues and transport interchanges.