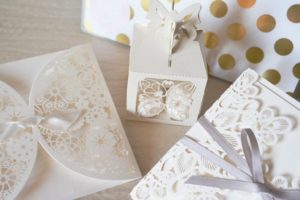 As the nation prepares to celebrate the royal wedding of Prince Harry and Meghan Markle, John Lewis has today (Monday April 30) published a report on the wedding trends of 2018.

The department store group’s gift list service manager Tasneem Shafiq said: “We’ve analysed thousands of gift lists created in 2011 – when Prince William and Kate Middleton got married – and in 2018, and there are significant trends in couples’ decisions.

“The biggest shift we’ve seen is that couples are choosing technology, and in particular smart home products, over more traditional choices.

“In 2011 our most popular gift list product by value was a premium cutlery set, whereas this year both first and second place are taken by smart speakers. The most expensive wedding gift selected in 2011 was a £2,500 sofa, and this year it’s a £3,499 LG OLED 55 inch television.

“However, plates, bowls, towels, toasters, roasting dishes and bedding still appeared on most lists in both 2011 and 2018. Items which appear on many 2018 gift lists but weren’t on any lists in 2011 are: firepits, voice activated speakers, Star Wars Droids and barista-style coffee machines. And this year, few couples are asking for microwaves, digital photo frames and landline telephones.

‘Since 2011, the nation’s obsession with great food and cooking has continued to rise and as a result, when choosing housewares products, couples are opting for barista-style coffee machines, gourmet steamers, pasta making machines and non-fat frying pans. In 2011 they were more likely to ask for microwaves, woks and slow cookers.

“Not only have cooking choices changed but also how we eat. In 2011 more plates were given as gifts than any other product – but now the most-bought gift is a bowl.”

Research by Wedding Insurance from John Lewis Finance has found that almost a quarter (24%) of weddings now take place on a Thursday or Friday.

The findings have also revealed that getting married on a Wednesday is a growing trend, with the number of weddings taking place on this day increasing by 91% over the past five years.