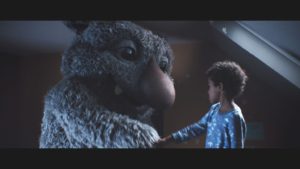 John Lewis unveiled its 2017 Christmas advertising campaign ‘Moz The Monster’ on johnlewis.com, social media channels and in its shops across the UK last Friday (November 10). The advert also made its TV debut that evening on Channel 4 and all Sky’s own channels.

Set to a cover version of The Beatles’ song ‘Golden Slumbers’, recorded by British band Elbow, the two-minute advert tells a heartwarming story of a little boy called Joe, who is kept awake by a 7ft imaginary Monster called Moz who is living under his bed.

The department store group said: ‘The two form a friendship and play together every evening. But staying awake through the night starts to take its toll on Joe, who can hardly keep his eyes open during the day.

‘For Christmas, Joe receives the gift of a night light which helps him finally get some peace and quiet from Moz, and a good night’s sleep.

‘Just as the viewer thinks the ad has come to a close, Joe turns the light back off. He hears the familiar rumblings of his friend and is reminded that he can bring Moz back any time he thinks of him.”

Moz The Monster was created by advertising agency adam&eveDDB and directed by Oscar-winning French director Michel Gondry, best known for his feature films ‘Eternal Sunshine of the Spotless Mind’, ‘The Science of Sleep’ and ‘The Green Hornet’.

He has also directed music videos for Bjork, Daft Punk, the White Stripes and the Rolling Stones.

Michel is well known for directing one of the most awarded commercials of all time – Levis Drugstore. More recently he has been directing commercials for Gap, Nike, Coca Cola, Pandora and Apple.

John Lewis customer director Craig Inglis said: “This year’s Christmas campaign brings to life the power of children’s imaginations and the joy of great friendships. Moz and Joe’s story is magical and heartwarming and I’m sure it will be loved by all of our customers, young and old.”

Michel Gondry said; ‘When I told my ex-girlfriend I was doing the next John Lewis Christmas film she said: ‘You have big shoes to fill; this John Lewis commercial must make people cry, don’t forget.’ Last week I showed it to her and she cried. Phew!”

In addition to watching the advert, people will be able to enjoy Moz and the story in different ways. At the John Lewis flagship shop on London’s Oxford Street, visitors will be able to see and hear what’s thought to be the world’s first ‘farting and snoring’ window as Moz plays in the rooms in Joe’s house.

On Facebook  people will be able to ‘mozify’ their faces using their Facebook cameras, and in 10 shops, customers will be able to create their own monster selfie at a Monster Maker station.

A recording of actress Sally Phillips reading the Moz The Monster story will be available for download from johnlewis.com, Sky boxes and Google Home. Google Home customers will also be able to personalise their stories by choosing their own sounds effects.

John Lewis has chosen Barnardo’s as its charity partner this Christmas and will make a donation to the children’s charity from the sale of Moz cuddly toys and mugs.

The advert can be viewed on www.johnlewis.com/christmas-advert and on John Lewis’s YouTube channel www.youtube.com/johnlewisretail.