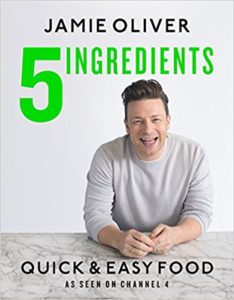 Jamie Oliver’s new cookbook is number one in the ‘The Sunday Times’ list of bestselling manuals, for the third consecutive week.

At number two is ‘Nadiya’s British Food Adventure’ by Nadiya Hussain. This book is a tie-in to the 2015 Bake Off winner’s recent BBC2 show of the same name.

During the eight-part series, Nadiya travelled across the country to meet growers, producers and pioneers behind ‘the best of modern British food’. Inspired by her tour, she has created more than 120 recipes that mix the local ingredients she encountered with her favourite flavours, with a nod to her Bangladeshi roots.

Nadiya is on BBC2 on Thursday (September 21), co-hosting the competitive cookery show ‘The Big Family Cooking Showdown’, which airs at 8pm.

At number four is ‘Feasts’ by the award-winning Persian chef Sabrina Ghayour. This follow-up to ‘Persiana’ and ‘Sirocco’ covers an array of Middle-Eastern dishes, from breakfasts to banquets and the simple to the sumptuous.

At number five is ‘Sweet’ by superstar chef Yotam Ottolenghi and his long-time collaborator Helen Goh. It is a collection of over 110 recipes for sweets, baked goods, and confections.

The manuals list was published in ‘The Sunday Times’ ‘Culture’ magazine on September 17. The list was prepared by and data supplied by and copyright to Nielsen BookScan, taken from the TCM (Total Consumer Market) for the week ending September 9.