24th November 2017 News Comments Off on ‘Jamie and Jimmy’s Friday Night Feast’ is back with celebrity guests 2,604 Views 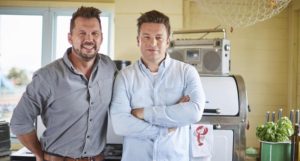 Jamie Oliver and Jimmy Doherty are back with a brand new cookery show that starts tonight.

The fifth series of ‘Jamie and Jimmy’s Friday Night Feast’ kicks off at 8pm on Channel 4.

The broadcaster said: ‘Over 12 weeks, in a pop up cafe at the end of Southend Pier, the boys will be joined by a host of famous faces, from Hollywood film stars and British TV royalty to comedians and musicians.’

Comedians Greg Davis, Sarah Millican and Johnny Vegas will pop in too, in a bid to distract the lads with a laugh, and multi-platinum recording artist Craig David will attempt to impress the café’s customers with his gastronomic skills.

During the series, the pair will also be campaigning about a range of food issues, and Jimmy will be using his DIY skills to create some imaginative solutions to foodie dilemmas.

In tonight’ s show, Jamie and Jimmy call for more free-range duck farming in the UK, while Jimmy creates a Korean barbecue from a picnic table – and the café welcomes Simon Pegg. As he’s been filming in Morocco, the trio enjoys a lamb tagine, while Jamie cooks a Provençal bake: pancakes layered with smoked ham and melted cheese.