Is the rise of cookery shows to blame for declining DIY trends?

4th April 2019 News Comments Off on Is the rise of cookery shows to blame for declining DIY trends? 1,204 Views 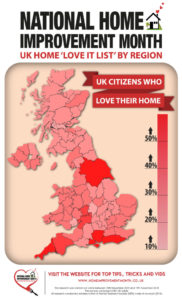 An online survey of 2,001 UK homeowners conducted by Vital Research last November on behalf of BHETA revealed that almost three-quarters (69%) of respondents don’t love their homes, only 21% feel proud of their homes and 10% feel embarrassed by their homes. A further 55% rarely make home improvements.

NHIM suggests this is a direct consequence of the decline in DIY TV programmes such as ‘DIY SOS’ and the rising popularity of cookery shows. It said: ‘On every TV guide across the UK, you’ll find popular cooking shows such as ‘MasterChef’ and ‘The Great British Bake Off’, while property renovation programmes feature less and less – a stark contrast to a decade ago when DIY television was in its heyday.

‘The early noughties boasted the golden generation of DIY programmes such as ‘Changing Rooms’, ‘DIY SOS’ and ‘60 Minute Makeover’. However, in the past decade, these shows have hung up their white overalls and ceased production. Attempts to revive these hit DIY shows have resulted in multiple changes, with ‘DIY SOS’ transitioning into ‘The Big Build’ in 2010 while 60 Minute Makeover transformed into ‘’Peter Andre’s 60 Minute Makeover’ in 2013.

NHIM said that when ‘DIY SOS’ first hit our screens in the 1990s, the show’s largest viewing demographic was 15-35-year-olds ‘who picked up an interest in home renovations and the feel-good excitement that came with it’. But In 2010, ‘a new breed of television caught the nation’s attention. ‘The Great British Bake Off’ captured the hearts of a new generation of 15-24-year-olds, and the focus of DIY home improvements immediately changed to baking.

With baking becoming a ‘generational interest’ for 15-24-year-olds, NHIM found that those aged 15-24 find it difficult to make basic home improvements. According to NHIM’s survey, 33% of 18-24-year-olds feel uncomfortable with hanging a picture and 52% feel uncomfortable putting together flat pack furniture – a stark contrast to 77% of 45+ year olds who don’t have a problem with either.

NHIM ambassador interior designer Julia Kendall (the former host of BBC One series ‘DIY SOS’ and ITV’s ‘60 Minute Makeover’) commented: “People are inspired by what they see (or don’t see) on television. The massive popularity of [Japanese organising consultant and author] Marie Kondo’s decluttering book is evidence that there is still a huge enthusiasm for the home. Personally, I believe the desire for a beautiful, well-organised home is as strong as ever.”

She added: “Programming tends to be cyclical, so with any luck, we’ll see a new raft of DIY and interiors shows on screen before long! I’m hopeful they’ll be representative of the importance of creating a well-balanced environment in our homes that supports our health and well-being.”