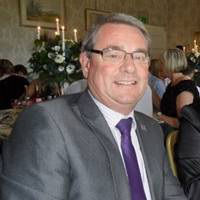 The housewares industry has been paying tribute to David Jarrett, who sadly passed away last Wednesday (February 13) following a short illness, surrounded by his family.

With 35 years of experience in the housewares industry, David was an independent sales agent based in the south-west.

His career started in 1977 when he took on the post of production manager at Mulberry, the fashion design company based in Somerset. In 1984, he joined Bristol-based housewares supplier T&G Woodware as warehouse manager and after a successful period was promoted to operations director. He stayed there for 15 years, before becoming managing director of his own company, Avanti Housewares, in 2000.

He spent the next six years importing and distributing housewares products to the retail sector before becoming a sales agent in 2007.

On February 4, David was named Britain’s Best Housewares Salesperson at The Housewares Innovation Awards 2019 ceremony, organised by www.HousewaresLive.net and Housewares Magazine at the National Conference Centre in Birmingham, in partnership with Spring Fair. His trophy and certificate was collected on his behalf by JWP sales & marketing director Geoff Hounslea,

Forma House business development manager Simon Maghnagi led the tributes. He said: “My heart is broken for David and all his family. David was a big part of our Forma team and I truly loved our debates. Our team is feeling the pain of losing someone we respected and truly thought of as one of us. There are no words to sum up how much David will be missed. This industry adored him. He was truly respected and people will miss him greatly.”

The DRH Collection director David Holmes said: “It is with very great sadness that we learned that David had passed away. He joined us as an agent in 2007 when we were a very young company, and we are indebted to him for his belief in us even then. It has been a real pleasure to have him as part of our team these last 12 years, and I feel honoured to have worked alongside him, as both a colleague and a friend.

“It is so fitting to think that David won the Britain’s Best Housewares Salesperson Award at The Housewares Innovation Awards 2019 just recently in Birmingham. Although sadly he was not able to collect the award himself, this just reflects what a well-respected ‘Ambassador of Commerce’ David was to his very many customers, who had also become his personal friends. David was truly a gentleman in every sense of the word: charming and helpful to customers and industry colleagues alike. He will be very sadly missed by all those who had the fortune to work alongside him.”

Silverwood managing director David Jack said: “I knew David for around 20 years, both during my time as a cookshop owner and in my current role as managing director of Silverwood. We are very saddened by the news of his death. He was an ‘old school’ housewares agent – dependable, reliable and knowledgeable – who was genuinely interested in looking after his customers, and had a real passion and understanding of their needs. His whole outlook was that ‘it’s a partnership’ – retailers felt that he was working for them as much as for the companies he represented – and he worked very hard. He will be greatly missed.”

Navigate marketing director David Atkinson said: “David was one of the nicest gentlemen that Navigate has had the opportunity to work with. He was always enthusiastic and supportive over the years that we got to know him, and was clearly held in strong regard both by his principles and his customers. David was a true credit to the housewares industry – and it’s a fitting epitaph that he should scoop the Britain’s Best Housewares Salesperson Award at The Housewares Innovation Awards 2019 ceremony, held during the Spring Fair.

JWP sales & marketing director Geoff Hounslea said: “Everybody at JWP is devastated at the untimely death of David. He was a much loved man, by me and all of his colleagues and customers. We would like to pass on our deepest condolences to David’s family and many friends. He will be greatly missed.”

Ladelle UK sales manager Evelyn Seton said: “It is with great sadness that we heard of David’s death. He was a sincere and lovely man: a true gentleman. Very conscientious and hardworking, he always put his customers first. It was a pleasure to have him as a sales agent. The team at Ladelle would like to pass on our condolences to David’s family, as he will be very sorely missed and fondly remembered.”

T&G Woodware managing director Patrick Gardner said: “David Jarrett came to T&G in December 1984 from the Mulberry company where he was production manager. He took up his position of warehouse manager and for the first time created a level of efficiency we had not yet achieved. After a successful period in the warehouse, he was promoted to operations director to allow me to spend more time with sales and marketing.

“In 1999 he moved on and subsequently became an agent in the housewares industry where he spent several years selling for various brands until his more recent illness. His death was premature: he was too young to die. He always had plenty of energy and imagination and his presence will be missed by many.”

Tramontina UK managing director Alex Frubel said: “It was an honour to have met and worked with such a great person. David was a gentleman with a big heart and an extremely professional work ethic in dealing with both our company and with our customers.”