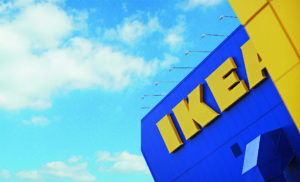 Home furnishings giant IKEA officially celebrated the construction of its new store in the Devon city of Exeter last week (Thursday May 18).

Due to open in early summer 2018, IKEA has invested £80 million in the branch, which will be located on Newcourt Way and will create 350 jobs. The outlet will be the 21st IKEA store in the UK.

Gillian commented: “In our 30th anniversary year, our new Exeter store highlights our commitment to continued expansion and investment in the UK.

“As part of our growth plans, we aim to make IKEA as accessible to as many people as possible, and we are delighted to be able to bring our home-furnishings expertise to Exeter and the surrounding area.”

IKEA Exeter will be the retailer’s most sustainable store to date and will aim to achieve 100% renewable energy. The store expects to receive a BREEAM ‘excellent’ accreditation and will incorporate several green technologies such as Solar PV panels on the roof, rainwater harvesting and ground source heating.

Electric vehicles will be used for home delivery. IKEA will also create new cycle lanes around the store and will provide six electric bike charging points. IKEA actively encourages its staff and visitors to use sustainable transport options where possible and is working with local transport providers to improve transport links around the store.

Peter said: “This is a significant moment for Exeter. We have long been anticipating IKEA’s arrival in the city, which is why we’ve worked closely with IKEA to make this happen.

“Now the diggers are beginning their work, a new IKEA store is fast becoming a reality. It will create many new jobs for local people in and around Exeter, as well as bring investment to the city and surrounding region. The store will be a great addition to the south-west’s retail offering, and we look forward to the opening.”

Share
Previous Home sales down 2.2% at John Lewis
Next IKEA to create 1,300 new jobs in UK