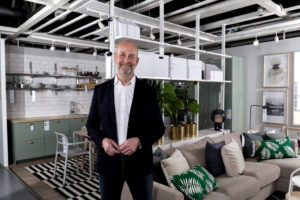 IKEA has appointed Peter Jelkeby as country retail manager to lead the UK and Ireland business of the Swedish homeware giant.

Swedish-born Peter is returning to IKEA following a career of over 20 years with the company in Sweden, Russia, Vietnam and the UK and Ireland.

He took on his first IKEA role as a part time co-worker in his local store and in 1989 joined IKEA Trading based in Moscow followed by IKEA Asia Pacific, before joining Habitat.

In 2000, he joined IKEA UK and Ireland and over the next eight years held a number of positions including store manager of IKEA Lakeside, marketing manager, sales and communication manager and deputy retail manager.

This month, Peter returned to IKEA to become country retail manager, IKEA UK & Ireland. He is now responsible for more than 12,000 co-workers across both countries.

Peter said: “I’m delighted to return to IKEA UK and Ireland at such a significant point in our history, as we evolve and renew our business to ensure IKEA’s continued success. Building on many years of solid growth, we are responding to the changing needs of our customers to secure an IKEA that is affordable, reaches more people, delivers excellent customer experience and is truly people and planet positive.

“And while IKEA continues to evolve, our vision – to create a better everyday life for everyone across the UK and Ireland – continues to be at the heart of everything we do. Our co-workers, our stores, our product range and our home furnishing expertise are fundamental to our continued growth in the market.”

He added: “I look forward to reconnecting with past colleagues and meeting all our co-workers across the UK and Ireland as together we continue to grow and develop the IKEA business – not just today and tomorrow but for many years to come.”