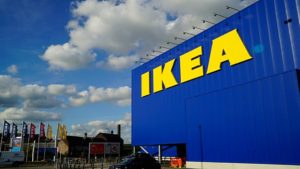 Gillian was succeeded yesterday (Friday June 1) by Javier Quiñones, who has held the post of IKEA UK and Ireland deputy retail manager for three years.

Javier joined IKEA Badalona in Barcelona as a part-time co-worker in the self-serve department in 1997 and then progressed within IKEA Spain to roles including sales manager and store manager, before joining IKEA UK and Ireland in 2014.

Commenting on his new position, Javier said: “Having already spent 20 fantastic years at IKEA, I’m excited to take my next step as country retail manager for IKEA UK and Ireland.

“There’s a huge amount of innovation and transformation in the retail industry, from experimenting with in-store experience to merging digital and physical retail. I’m looking forward to ensuring IKEA leads the way, and continuing the journey we’ve been on to date, building on Gillian’s legacy.”

Gillian said: “Leading the UK and Ireland has been a great privilege and together we have had five exceptional years of growth becoming more accessible to people through the opening of three new stores [Reading, Sheffield – and Exeter, which opened last month] and the development of new store formats, as well as strengthening our online offer. I’m looking forward to taking my next step in the business and having a positive impact on the future development of IKEA.”