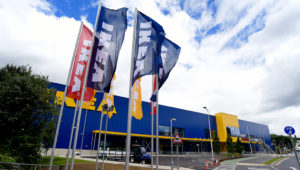 The doors of IKEA’s new Exeter store will officially open to the public on May 10.

The Swedish homeware giant has invested £80 million in the 29,000sq m branch on Newcourt Way in the Devon city, which will be its 21st full sized store in the UK and 22nd in the UK and Ireland.

The unit will also be the retailer’s most sustainable in the UK to date and will aim to achieve 100% renewable energy. It will have a BREEAM ((Building Research Establishment Environmental Assessment Method)‘excellent’ accreditation and incorporate several green technologies such as Solar PV panels on the roof, rainwater harvesting and ground source heating. IKEA Exeter will also provide six electric vehicle charging points and have electric vans available as part of its home delivery service.

Other features will include a 1,000-space car park, crèche, restaurant, bistro and a ‘Changing Places’ toilet facility. This purpose-designed to be ‘bigger and better’ than a conventional accessible toilet; large enough to accommodate a wheelchair and up to two carers, and featuring equipment including a wetfloor shower area, height adjustable changing bench and overhead hoist, plus a peninsula toilet, and basin.

The store is now going through the final stages of  staff recruitment, with almost all its 350 jobs filled. IKEA Exeter store manager Nick Earle said: “We know there has been much anticipation for IKEA in Exeter and we’re incredibly excited that we will open our doors to the city at the beginning of May. Along with my team, I’m looking forward to celebrating with the people of Exeter in the run-up to the store’s opening, and to welcoming them into the store on May 1.

“We look forward to working closely with the local community to create a better everyday life for the people of Devon, and wish to contribute by being a good neighbour as well as providing a great shopping experience.” The store has already been playing an active role in the community through partnerships with local charities, including the Exeter Community Initiatives (ECI) Children’s Centres: 40 IKEA staff recently donated a range of new IKEA products to the ECI’s Flying Start Children’s Centre.