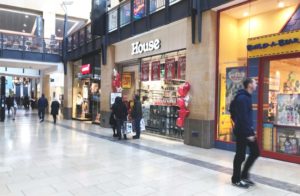 A pop up store opened on the ground floor of The Grand Arcade in Cambridge on November 2, followed seven days later by a branch in The Glades shopping centre in the Kent town of Bromley which made its debut on November 9.

The Australian retailer has opened a total of six stores in the UK so far this year. The first opened at the Westgate shopping centre in Oxford on April 16, coinciding with the launch of www.houseuk.com.

Established in Australia in 1978, HOUSE is a member of the Global Retail Brands (GRB) family. GRB bills itself as the largest private specialty kitchen and homewares chain in the Southern Hemisphere, with more than 170 stand-alone stores. The UK is its first foray into the North hemisphere.

HOUSE has ambitious plans to open a total of 75 stores across the UK within three years, creating 1,000 jobs. MMX Retail is sole property advisor for HOUSE in the UK.