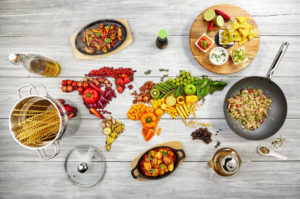 Housewares supplier Horwood has revealed details of a new biannual campaign for its Stellar and Judge brands.

Each Spring and Autumn. Horwood will be creating a seasonal initiative which will be supported by in-store displays, merchandise, recipes, and social media graphics and support.

Horwood marketing manager James Robinson said: “By creating appealing in-store displays across a family of products, we believe the combination of activities will increase the appeal to the end-consumer.”

The first campaign was launched earlier this month at The Housewares Autumn Show. Held from August 14 to August 16, this trade exhibition exclusively for independent retailers was hosted by buying group AIS at its headquarters in Solihull.

The push will run with Horwood’s retailers in the months of September, October and November. Called ‘Tastes of the World’, it focuses on promotional offers for a selection of Judge speciality cookware, serveware and tools.

The aim is to enable consumers ‘to recreate recipes from their holidays and serve them in style, keeping that summer holiday feeling alive well in to the Autumn, by providing all that’s needed – from cooking tools to recipes – to bring back those delicious travel memories.’

The spotlight is on four international cuisines: Spanish, Mexican, Italian and Chinese. Horwood said: ‘The recipes we have selected prove that Judge speciality cookware is not only easy to use, but also versatile.’