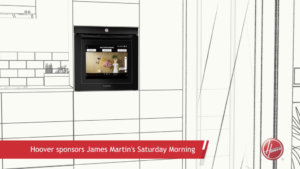 The weekly two-hour shows, which start at 9.30am, are filmed from the celebrity chef’s own home. The series reflects James’s love of hearty food as well as some of his other passions, from the great outdoors to his beloved dogs and fast cars.

Each week he welcomes two guests from the world of food, entertainment and sport. The chef and his guests cook together inside James’ kitchen or in his garden, making the most of his BBQ and pizza oven. Each show also features a guest regional chef, who cooks in their home or their own restaurant.

Hoover’s sponsorship runs until the end of the series in June. The inaugural Hoover-sponsored show will feature gardening expert Alan Titchmarsh and French chef Claude Bosi and a menu of crab tagliatelle, lamb hotpot and lobster roll.

Antony Peart, director of brand and communications at Hoover Candy Group, said: “The decision to sponsor ‘James Martin’s Saturday Morning’ was made in order to boost our cooking credentials – and to align the brand with a programme that is relaxed, and demonstrates very simply but effectively how you can create tasty dishes without too much complexity.

“The show is very topical, both with its discussion points and ingredients, so we’re hoping that it will inspire people to replicate the dishes, or their own take on the recipes, in their own homes.

“We want to reinforce our position as a manufacturer of innovative and stylish appliances and believe that positioning ourselves with a well-liked ITV show is a powerful way of achieving this.”