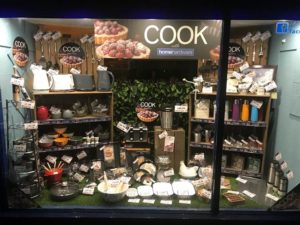 Home Hardware Southwest has announced that Blanchards Home Hardware at Bideford in Devon is the winner of its cookshop window dressing competition.

Staines & Brights Home Hardware of Tiptree in Essex received the runner-up accolade. The winner and runner-up will receive gift vouchers worth £100 and £50 respectively.

The contest was introduced by the dealer-owned wholesaler to support its annual 40-page Cookshop Catalogue (which contains details of housewares products along with recipes) and to inspire retailers to create eye-catching window displays.

Home Hardware Southwest bills itself as the largest voluntary organisation of its kind in the UK for independently-owned hardware and DIY stores. The company has more than 400 members including cookshops, housewares stores, hardware retailers, ironmongers and garden centres.

All members were invited to participate in the competition. Home Hardware Southwest said the overall standard of entry was ‘exceptionally high’ and thanked all the members who took part.