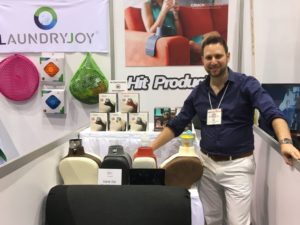 Housewares supplier Hit Products will be featured in a prime-time ITV series next month.

Presented by high profile business leader and TV personality Baroness Karren Brady CBE, ‘Give It A Year’ follows a host of budding entrepreneurs who have decided to go it alone and start a new business. Karren meets them at the launch of each venture’s first year, and revisits them 12 months later to see what they have achieved in that time.

The 12-part series began on April 16 and each 30-minute show covers two businesses. The episode featuring Hit Products will be screened at 8pm on Monday August 13.

Hit Products was founded by director Barry Freeder, who set up the company after being made redundant from the property industry, where he worked as a chartered surveyor for 10 years.

Barry said: “Not content with the 9-5 grind, and with a passion for product design and development, I decided to launch my own business – Hit Products – centred around creating unique consumer products -the first of which is couchcoaster.com.

“Still operating from my flat today, I have now sold close to 100,000 units globally with a retail value of some $2.5 million, and have travelled the world to sell my invention at trade shows in Europe, America and the Far East.”

He describes CouchCoaster as “the ultimate drink holder for your sofa”. Designed to ‘keep your drink safely next to you’, the product is suitable for mugs, tumblers, bottles and cans. Its silicone body wraps over different shapes and sizes of sofa arm, while its integrated weighted band is designed to ensure a secure fit.

CouchCoaster has now been joined by a desktop version called TableCoaster. Billed as “the ultimate anti-spill drink holder”, it features a low centre of gravity to ensure drinks stay upright, and a micro-suction base that acts as a strong adhesive, leaving no residue. It can be used ‘anywhere’ from desks, lap trays, bedside tables and high chairs to motorhomes and boats.

Hit Products founder and director Barry Freeder at his booth in the Inventor’s Corner at the International Home + Housewares Show, held in Chicago in March