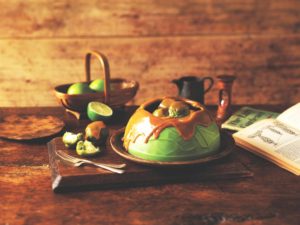 Waitrose has revealed that its ambassador chef Heston Blumenthal has ‘worked his magic to turn what can be the most divisive part of a traditional Christmas dinner into a dish everyone will love’: a giant ‘sprout’ filled with profiteroles.

The supermarket chain promises that the Heston from Waitrose Melting Chocolate ‘Sprout’ will appeal to even the most vehement sprout-haters.

The new dessert has a green dome shell which is textured to look like a giant version of the festive vegetable but is actually made with white chocolate, which is turned green by adding spirulina (a natural colouring).

When the dome is drizzled with warmed salted caramel sauce, it melts to reveal 18 green choux pastry profiterole ‘sprouts’ which are filled with a lime-flavoured crème patissiere.

The retailer said: The visual effect is a pile of sprouts doused in gravy but – with no actual sprouts or gravy used in the recipe – the flavour could not be more different. The zingy lime profiteroles perfectly balance the sweetness of the chocolate and salted caramel sauce.’

Heston, who owns Michelin-starred restaurant The Fat Duck at Bray in Berkshire, said: “The dishes that have caused the biggest response from our guests at The Fat Duck are those that look like something they’re not. What can be more fun at Christmas than playing with your guests’ minds and taste buds with a dessert that will leave everyone talking?’”

Waitrose dessert buyer Aileen Wood added: “Christmas is the perfect time of year to create a fun dessert with lots of theatre for people to enjoy together. We’re sure this unique pud will be a talking point, and will give sprout haters a chance to try a new take on the festive veg!”