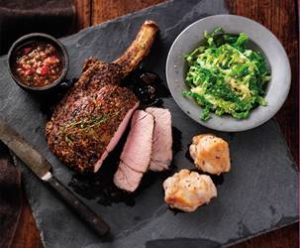 Heston Blumenthal is bringing back a forgotten cut of meat to Waitrose & Partners.

The dish – Heston from Waitrose Veal Chop & Sweetbreads with Sauce Reform and a Sherry Vinegar Butter – is inspired by a creation on offer at the celebrity chef’s one Michelin star restaurant: The Hind’s Head at Bray in Berkshire.

The supermarket chain claims to be ‘the only multiple retailer to stock sweetbreads’. It said: ‘The prime British veal sweetbreads (a type of offal) are butchered, prepared and ready to cook, so the hard work has been done for you.’

Heston said: “When developing new dishes for the Heston from Waitrose range, we looked at the whole spectrum of different cuts of meat, referring back to the work we’ve done through the years in Bray, as well as for our cookbooks. In the past, I’ve worked with different types of sweetbreads but have always come back to veal sweetbreads for their luxurious texture.”

Waitrose & Partners noted that last year, online interest for sweetbreads peaked in the autumn, with nearly a quarter of a million (246,000) sweetbread searches performed in November 2017, according to Google Keyword Planner.

The retailer suggested that this interest could have been prompted by the French le mois des abats (the month of offal), which sees restaurants push signature offal dishes in November. Other online searches included people looking for food pairings with sweetbreads, from mushrooms and peas to bacon and pasta.