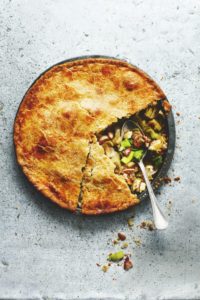 The supermarket chain’s IT director Mike Sackman said this figure is the same as last year, “despite snow affecting most of the country during the first half of the week”. He added: “The success of our one-day-only half-price promotions continued, which this time focused on party food and desserts.”

Mike noted that magnums of Champagne and Prosecco had a “sparkling week, as customers entertained in the run-up to Christmas”, including sales of San Leo Prosecco, up 39%.

Panettone sales were up 34%, as tastings of Heston from Waitrose Black Forest Panettone took place in branches.

“Freezing temperatures also led to strong sales of hearty food,” Mike commented, with pie sales up 12% and soup up 12%. Customers opted for convenience too, with ready meal sales up 7%.

Lots Of Leeks Pie from Waitrose