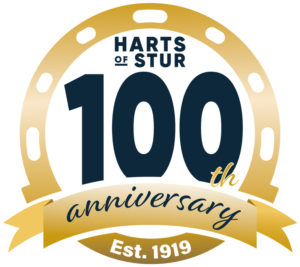 2019 is a special year for housewares retailer Harts of Stur, as the Dorset company celebrates 100 years as a family business.

Philip Hart, managing director of Harts of Stur, commented: “For any business to reach its centenary year is a major achievement. I’m immensely proud that our family company has joined the ‘100 Club’.

“I wonder if my grandfather Walter [Hart] would have ever imagined that his company would still be going strong 100 years after he set up as a blacksmith after WWI? Family is extremely important to us and that’s why we will be celebrating this milestone with a selection of family-themed events and initiatives throughout the year.”

The Harts story began in 1919 when Walter Hart, freshly demobbed from the Royal Field Artillery where he served as a shoesmith, started his own blacksmith business.

As his business grew, Walter was joined by his son Bill in 1941 to help shoe horses, mend cart wheels and do other general repair work. Walter’s other son, Eddie, joined in 1945 after finishing his National Service with the RAF.

In 1949, having outgrown their small workshop, two blacksmith shops and forges were built on the site of the current store in Sturminster Newton. It was decided around this time to branch out and Eddie started retailing agricultural ironmongery and manufacturing basic farm implements.

Philip joined in 1979, and set about transforming the retail shop from an agricultural supplier into a country department store. Harts took its first steps into mail order in the early 1990s and a trading website followed in 1995.

Philip’s sons, Johnathan and Graham, joined the firm after finishing university and pushed forward with the company’s online presence, as well as improving the customer experience in-store.

Today Harts of Stur bills itself as one of the one of the UK’s largest in-store and online retailers of cookware, kitchenware and kitchen electrics. Its revamped website, which went live in September 2018, has already won industry awards for its technology.

An improvement plan for the shop is on the cards for 2019. In a phased programme of work, this multi-million pound project will create an additional 20,000sq ft of retail space. The garden shop will be amalgamated into the main store allowing the old site to be levelled, creating additional parking space. The exterior will also get a facelift and additional office space will be created.