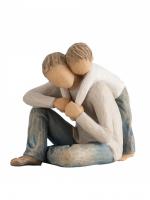 Clintons has expanded its range of Father’s Day cards to reflect the diversity of modern British families.

But it also includes some new options to reflect family arrangements today. There are cards for ‘father-figures’, step-fathers and grandfathers – and single mums who fulfil the father role.

Clintons director Tim Fairs said: “Recently we’ve been asked by customers whether it’s time to cater for a wider range of family circumstances. Our ‘Happy Father’s Day, Mum’ card is just one of many examples of new cards that we’re bringing to our range.

“We’re also looking at a range of Single Parent’s Day cards for March 21, to reflect the wishes of parents who don’t wish their role to be defined by gender.”

Clintons was founded in 1968 and is a leading retailer of greeting cards, gifts and wrap in the UK. It operates more than 400 stores as well as a fully transactional website.

Share
Previous Get set for Father’s Day
Next From hearth to Darth: 50 years of Father’s Day cards reveals changing depictions of Dad