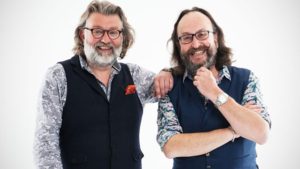 Si King and Dave Myers, better known as the Hairy Bikers, will be at the world’s largest flower show next week, cooking in their own kitchen garden.

For the first time, the show will include an entirely edible kitchen garden. It was created by award-winning garden designer Juliet Sargeant, who won Gold at the RHS Chelsea Flower Show last year, to promote cost-efficient ways of growing fresh food at home.

‘Kitchen Garden Live with the Hairy Bikers’ will be broadcast every weekday morning next week from 11am to 11.45am on BBC One.

The duo said: “We’re thrilled to be presenting a week of live telly from the RHS Hampton Court Palace Flower Show.

“It’s going to have everything we love: beautiful flowers and amazing gardens, delicious food, entertaining celebrity guests and crowds of enthusiastic visitors that we can have a laugh with. We can’t wait!”

The five-part series kicks off on Monday (June 31) when the Hairy Bikers will be joined by chef Jeremy Pang, who will show viewers how to stir-fry on a barbecue and by Juliet, who will show them around the kitchen garden. Aimed at gardeners of all ages and abilities, it will demonstrate simple growing techniques and recipe ideas for small spaces. Si and Dave will use ingredients from the kitchen garden every day on the show.

On Tuesday (July 4), the culinary pair will be joined by singer-songwriter Gregory Porter. Guest chef Matteo Salvatore will share his tips on how to make the best seasonal pizza and chef Tommy Banks will let the cameras into his Michelin-starred restaurant’s kitchen garden.

On Wednesday (July 5), the Hairy Bikers will be joined by singer Jimmy Osmond. They will also meet chef Paul Ainsworth – and his gardener Ross Geach – in the kitchen garden which supplies his restaurants.

In episode four on Thursday (July 6), The Hairy Bikers will be joined by another celebrity guest and cook some more summery dishes al fresco. Si will visit a garden at the show which is designed for blind veterans, and Dave will learn how to grow his own cocktails. Guest chef Adrian Luckie will hit the coals to make his signature jerk chicken.

In the fifth and final episode on Friday (July 7), the twosome will be joined by ‘Call the Midwife’ star Charlotte Ritchie. Chef Robin Gill will open the doors to his urban kitchen garden, and guest chef Chantelle Nicholson will showcase her cooking skills on the barbecue.

BBC One’s weekend food show ‘Saturday Kitchen’ will broadcast live from the show next Saturday (July 8) from 10am.