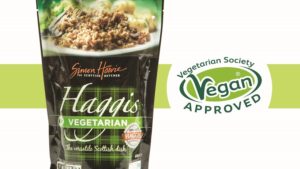 Demand for the vegetarian/vegan version of haggis is rocketing at Tesco.

The supermarket chain said that thanks to the vegan food boom, sales of its non-meat version of the Scottish delicacy have soared by 120% in the last year.

The demand – at Tesco’s Scottish stores – is so strong that the retailer has been trialling the veggie version at stores across England and Wales in time for Burns’ Night this evening (Friday January 25): a celebration held in honour of Scotland’s most famous poet Robert Burns at the end of January every year.

Tesco’s two top-selling vegetarian haggis, which have been only on sale in its Scottish stores, are made by Simon Howie and Macsween and have both been recently approved by The Vegan Society.

“Even though vegetarian haggis has been around for a few years, we’ve never seen anything like the current demand – and it’s not just during Burns Week, it’s all year round.

“Veggie haggis is a delicious meal in its own right – not too dissimilar to a nut roast – and we think vegetarians and vegans are buying them as centrepieces for roast dinners.”

Tesco added that interest in Burns Night itself has also taken off in England and Wales. During Burns Week last year, the grocer saw demand for haggis soar by 700% south of the border.

This year Tesco is offering a Burns Week Meal Deal including a haggis (original or vegetarian), a sachet of whisky sauce, a side of neeps and tatties [swede/yellow turnip and potatoes] plus a bottle of either regular or diet Irn-Bru [a Scottish carbonated soft drink] for £5.