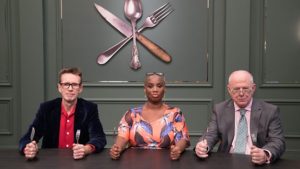 ‘Great British Menu’ is back on BBC Two this spring, putting the nation’s most talented chefs to the test.

With a brand new format of two mid-week hour-long episodes and a peak slot on TV, the series will see 24 chefs from across Britain’s regions compete to serve their dish at the final banquet.

The programme will mark the 50th anniversary of the last time The Beatles played live together and celebrate Britain’s success as a world player in music. The final banquet will be held at the famous Abbey Road Studios in London which is closely associated with the Beatles, who recorded almost all of their albums and hits there. Judges Andi Oliver, Oliver Peyton CBE and Matthew Fort will have the task of choosing the winning four-course menu.

BBC Two controller Patrick Holland said: “’Great British Menu’ is a brilliant celebration of the best talent in the UK food scene, loved by audiences young and old. I’m delighted with its new shape and place at the heart of the schedule.”

Commissioning editor Julie Shaw added: “The team have made this year’s ‘Great British Menu’ bigger and better than ever. The theme – celebrating 50 years of British pop music – has brought out the best in the competing chefs and we see some exceptionally creative and visually spectacular dishes. If you love food and drama, this is the show for you.”