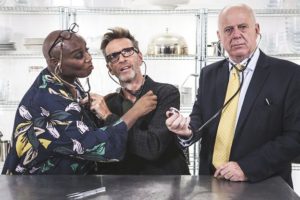 ‘Great British Menu’ (GBM) is back on BBC Two this summer, and this year – for the first time ever – one chef will be crowned the champion of champions when banquet diners vote on their favourite dish in the final episode.

.The series also will celebrate the 70th anniversary of the National Health Service (NHS), with the nation’s top chefs cooking dishes in tribute to NHS staff.

Helping judges Andi Oliver, Oliver Peyton OBE and Matthew Fort to select the winning dishes are guest judges who represent the NHS heroes that treat more than a million patients every 24 hours.

The show will challenge 24 chefs to create dishes for a banquet, held in the Great Hall of St Bartholomew’s Hospital, Britain’s oldest working hospital.

In each weekly regional heat, three chefs must first battle it out to impress a veteran judge whose identity won’t be revealed until they walk through the door. Representing some of the biggest names in the UK restaurant scene, they include Michael O’Hare, Angela Hartnett, Daniel Clifford, Tom Aikens, and – in his first year as a judge – Paul Ainsworth.

Only two chefs will make it through to a regional final, where they will need to convince the judges that their dishes deserve a place in the national final – and a potential spot on the final banquet menu.

Andi Oliver said: “I am so absolutely thrilled to be returning to GBM – and when I heard that this year we would be celebrating the extraordinary people who work in our beloved NHS, I jumped for joy! The combination of culinary excellence from our incredible chefs and the hugely emotional and personal connection that we all have to the NHS means this will be an exceptional year for the competition.”

Oliver Peyton said: “The joy in everyone’s hearts involved in this competition was amazing. All the chefs wanted to be at the final banquet because, like everybody else, we owe the people who work in the NHS a huge debt of gratitude.”

Matthew Fort said: “I can’t think of a better group of people to celebrate series 13 with than the heroes of the NHS, and luckily for us judges the standard of the food is higher than ever.”

Guest judge: Dan Smith (consultant paramedic and one of the first at the scene of the Manchester Arena bombing)