Great British Menu is back 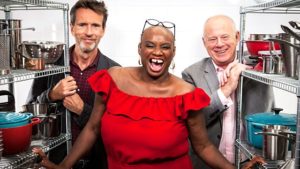 A new series of ‘Great British Menu’ returns to our screens tonight (Tuesday May 2).

In the series, 24 chefs will compete for a chance to show off their culinary skills at a banquet honouring 140 years of the Wimbledon Championships.

Across eight regional heats, the chefs have been challenged to create outstanding dishes that capture a ‘taste of summer’ and the prestige of Wimbledon.

Tonight, it’s the turn of three chefs from London and the south-east. Tom Kemble is one of the youngest chefs in the country to hold a Michelin star and cooks at a restaurant in one of London’s most exclusive auction houses.

He is up against Mike Reid, who has cooked around the world and trained under both Gordon Ramsay and Michel Roux Jr, and Selin Kiazim, a rising star of the London scene renowned for her Turkish Cypriot fusion flavours.

Oliver Peyton is a renowned restaurateur and the founder of Peyton and Byrne bakery in London. Awarded an OBE for his services to the hospitality industry, he is the author of two cookbooks: ‘The National Cookbook: Recipes from the National Dining Rooms at the National Gallery’ and ‘British Baking’.

Andi Oliver is a restaurateur and food broadcaster who recently opened her new venture, Andi’s, in London. She has previously hosted her own cookery show on BBC Two entitled ‘Neneh & Andi Dish It Up’, and appeared as a judge on ITV’s ‘Food Glorious Food’. She is also a regular contributor to ‘The Kitchen Cabinet’ on BBC Radio 4.

He was formerly Food and Drink editor of ‘The Guardian’ newspaper and has presented several television shows including the Good Food channel’s ‘Market Kitchen’.