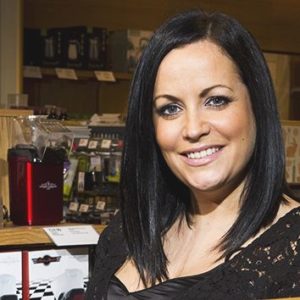 Lisa Scott, the founder and sales & marketing director of housewares supplier Gourmet Gadgetry, has reached the finals of the 2017 First Women Awards.

She has been named as one of five finalists in the Entrepreneur of the Year category. The other contenders are Angela Spang of June Medical, Kim Antoniou of Kafoodle, Hillary Graves of Little Dish and Coleen Wong of Techsixtyfour.

The First Women Awards were created in 2005 by Real Business (a digital publication for SMEs) to recognise and celebrate the achievements of exceptional women.

The recipients of the awards are women from various sectors, from public service to business owners.

With longstanding support from the CBI, prominent industry organisations and small businesses, the First Women Awards are billed as a programme that ‘inspires the next generation, fuels entrepreneurial passion and galvanises women to be a force for change’.

Real Business said: the winner of the Entrepreneur of the Year award ‘will have recognised a need, and executed a successful solution to that need, in an innovative and distinctive manner. She will be a strong, motivated and charismatic leader, most likely with a compelling personal story’.

Lisa commented: “According to the award organisers, the quantity of high calibre nominations received was phenomenal. So I’m delighted to have made the finals, putting Gourmet Gadgetry in the spotlight!”

The winner will be announced at a ceremony on June 29 at Hilton Bankside Hotel in London.

Based in Kent, Gourmet Gadgetry is a family-run business that grew from a passion for entertaining with food. The company’s range of ‘Fun Food’ products includes an award-winning pizza oven, popcorn makers, chocolate fountains and candy floss makers, which are combined with recipes and serving suggestions.