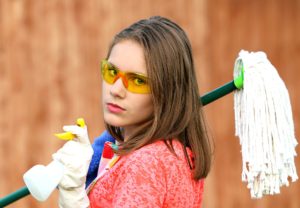 The annual tradition of spring cleaning is on its way out as Brits avoid housework, according to new research.

A survey of homeowners carried out by household appliances retailer AppliancesDirect.co.uk has revealed that 62% of Brits do not spring clean their house every year.

In fact the study suggests Brits are keen to avoid the housework at all costs. When quizzed on their cleaning habits, 72% of respondents said they do not enjoy cleaning their home.

While just 7% employ a cleaner to do housework for them, 77% would hire one if they could afford it and 44% would like to own a robot that could clean their house for them.

Despite a lack of enthusiasm for spring cleaning, Brits are investing a significant amount financially in appliances that help make must-do chores that bit easier.

One in four (26%) confessed to owning at least one piece of electrical cleaning equipment such as a robotic vacuum cleaner or steam mop to help make cleaning an easier task.

Mark Kelly, marketing manager at AppliancesDirect.co.uk, commented: “Whether it’s done weekly while dancing around the house to our favourite tunes, or just because the house is beginning to resemble a hovel, it’s likely that everyone will have to clean or do housework at some stage in their life.

“But as Brits’ lives get busier, and appliances become more advanced, the idea of spending hours cleaning the home is becoming less appealing.

“Brits should not be concerned that cleaning is not their favourite pastime. And while many people would like to have a cleaner – or a robotic maid from the future – to do the cleaning for them, it is not realistic for everyone.

“Luckily there are a number of appliances on the market, from steam mops to robotic vacuum cleaners, that have been designed to ease the chore of housework – and they are a lot more affordable than people might think.”