Go out? We’d rather stay in (and cook a big curry), thanks 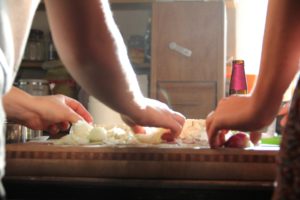 Thirty-one is the age when Brits officially hang up their dancing shoes and prefer staying in to going out on the town, according to a new study by Currys PC World.

A survey of 5,000 people by the electricals chain has uncovered how Brits are spending time in their homes in 2017.

Almost half (46%) of adults now dread social events or nights out, preferring to ‘lounge’ in the comfort of their own home, with 30% admitting that a perfect night-in would be one spent in front of the TV, devouring a boxset.

Nearly a quarter like to spend an evening at home, whiling away time on their phones, tablets and/or laptops by browsing social media.

In fact, 14% said that when they invite friends round, their all-time favourite pastime is scrolling through Facebook, while 28% let their hair down by playing computer games.

Some 29% said they still have an active social life, preferring big nights in, where they order in food, watch films, cook big curries or crank up the karaoke machine.

Currys PC World brand and communications director Matt Walburn said: “Our study recognises the fact that there comes a time when we appreciate our home comforts more than a hectic social life, and it can often be a drag to play the social butterfly at parties and nights out.”

He added: “Technology is a big lure of staying in and our findings show how it’s transformed home habits, with Brits proudly investing in their households more than ever before.

“It’s now almost impossible to get bored at home, with endless box sets and the latest technology such as 4K TV enhancing the in-house experience – so much so, that it often surpasses its ‘outdoor’ equivalent.

That, coupled with social media, online shopping, and gaming with pals, often means more pleasure can be had on a night in than a night out.”

The survey also found that on a typical night out, Brits will fork out £35. But a night in with a take-away, drinks and snacks will only cost £17.

The poll found that six in ten adults claim going out is now too expensive and 29% said they simply can’t face the next day hangover.

Nearly half said evenings out were no longer ‘their scene’ and a further 14% moaned about the unpredictable weather when hitting the town.

Having to get dressed up (22%), the laborious process of arranging babysitters (12%) and the hassle of booking taxis (21%) were also among the reasons that adults are shunning evenings out.

A whopping 46% said they love nothing more than changing into comfortable clothes for a night-in and 44% said they like to kick back and slouch on the sofa for hours on end.

The poll found that by the age of 37, adults are deemed too old to be dancing in nightclubs. And a harsh 37% of respondents said there is nothing more tragic than seeing adults in their 40s and 50s surrounded by 20-somethings in pubs and bars.

And of those polled, nearly seven in ten said they were relieved when they met ‘the one’ as it meant they no longer had to trawl the local haunts for a suitor and could finally embrace cosy nights in.