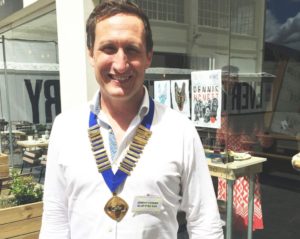 The Giftware Association (GA) announced the name of the new chair of its national committee at its AGM and Members’ Day, held in central Birmingham on June 20.

Jeremy Corner, the co-owner of award-winning greetings card supplier Blue Eyed Sun and wedding stationery specialist Ivy Ellen was elected to the role. He succeeds retail expert Henri Davis, who becomes the GA’s deputy chair. Gert Schyberg, founder and managing director of luxury candle supplier Sebnini, was announced as vice chair (meaning he will take over as chair in 2020)

The trio will head up the GA’s national committee, whose members come from across the giftware world. Three members were re-elected for a further two years: business development consultant Amanda Fergusson; Clive Briscoe, managing drector of Apples to Pears; and Howard Thomas, director of Giftscribes Gifts.

The theme of the Members’ Day was ‘preparing your business to be fit for the future’. The proceedings began with a keynote presentation by consultant Michael Weedon, managing director of exp2 Ltd, who gave an overview of the current retail scene on the high street.

Three panel debates followed on the subjects of compliance (CDPR, cybersecurity, CE marking and IP), the value of industry awards, routes to market and advice on how members could ‘futureproof’ their businesses.

GA ceo Sarah Ward commented: “The aim of the day was for it to be all-inclusive and for everyone to take away a learning. When our membership covers micro business through to multi-million pound companies, it’s hard to find content that suits everyone. But speaking to people after the event, it seems that the mixture of subjects and panellists sharing their knowledge has seen people learn and take something away.”

Founded in 1947, the GA is a national trade representative body which bills itself as the only UK trade association serving the gift and home industry. Members range from retailers to suppliers.