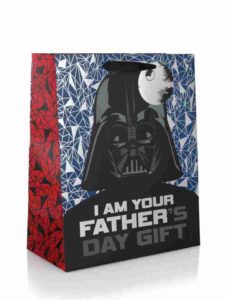 Archive analysis of Father’s Day cards by Clintons shows the extent to which dads’ roles have shifted in the modern home.

The national card and gift retailer looked at thousands of depictions of dads on Father’s Day cards since the 1950s.

The company said portrayals of dads as aloof, pipe-smoking, slipper-wearing, newspaper-reading, besuited chaps sitting in armchairs have all but disappeared (with the exception of parody cards).

They have been replaced by casually-dressed figures that appear to have put on 10-15 kilos in weight. They are more likely to be barbecuing or watching the football on the sofa with a drink in hand.

And they are far less likely to be shown behind the wheel of speed boats or sports cars or scoring a winning goal. They are, however, more likely to have a strong emotional connection with their children.

According to Clintons’ analysis, there have been five phases of Father’s Day cards in the last 50 years:

1.The formal phase [mid to late-1960s]: the slightly austere dad, sitting in an armchair in a three-piece suit and tie, smoking a pipe and reading the paper while his family attend to his every need.
2.The undo-the-tie phase [late 1960s to early 1970s]: characterised by cards that invite dads to abandon the razor and the tie for a day of ‘indulgence’.
3.The Walter Mitty phase [early 1970s to 1980]: dads as sporting icons or adventure sports enthusiasts, jumping from planes, piloting speed boats, driving racing cars or scoring winning goals.
4.The cute bear phase [early to late 1980s]: softer dads, portrayed as more approachable and emotional.
5.The anything goes phase [late 1980s to today]: today’s dads are more likely to be comically inept and ribbed for their fondness for beer or fast food. They are more likely to lying on the sofa and catching 40 winks than loosening their tie. Frequently portrayed as a useful source of loans, they are depicted, variously, as dogs, pineapples, gorillas, leopards, teddy bears, tortoises, lions, bears, elephants, crocodiles, donkeys, parrots and frogs. There is a 2% chance of dad being hailed as being a superhero; a 1% chance of him displaying ‘builders’ cleavage’ and a 1% chance of him starring as Darth Vader.

Clintons director Tim Fairs said: “Dads have always been treated affectionately in cards, but in the last decade we’ve seen reverence replaced with ‘anything goes’ humour.

“Some traditionalists might bristle at this. But the reality is that the humour shows how accessible and important dads are to their kids – and that’s a cause for celebration.”

A typical poem inside a card 50 years ago:

“You can sit in your shirt sleeves

Today if you choose

Get by without shaving

And leave off your shoes;

Get first whack at the paper

And have your own way:

Eat, drink, and be merry

A typical greeting inside a card today:

Thanks to you, I learned at an early age how to Save My Money…

…I used YOURS instead!

Have a Great Father’s Day”

Clintons was founded in 1968 and is a leading retailer of greeting cards, gifts and wrap in the UK. It operates more than 400 stores as well as a fully transactional website.

Share
Previous Happy Father’s Day, Mum
Next From trouble to triumph: one year at Poundland