From gin balloon glasses to spiralizers: what’s hot and what’s not in 2017 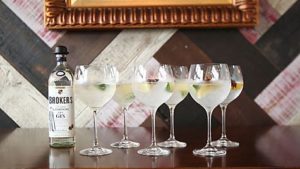 Six products defined 2017 – and seven products were left behind in the popularity stakes, according to John Lewis.

The department store group revealed these findings in the fifth anniversary edition of the John Lewis Retail Report, which is based on shopping data gathered by the retailer over 12 months from August 2016 to September 2017.

Here is John Lewis’ list of the six hottest products (with comments from the retailer):

1. Velvet sofa: ‘This has been the year of the velvet sofa. Sales of the sumptuous fabric formed a significant part of our overall sofa and chair sales, helping the UK’s homes to look plush. Customers also plumped for velvet throws and cushions, with sales rising by 46% and 56%.’

2. Gin balloon glass: ‘Gin was well and truly in, with balloon glasses favoured as the way to create a classic gin and tonic or a more exotic gin-based cocktail. The nation’s sophisticated taste in tipples was also evident in overall sales of cocktail glasses, which increased by 100%, and measuring jiggers, which rose by 59%.’

3. Khaki jacket: ‘For men and women, khaki jackets were big news, summing up the appetite for effortless, comfortable styles that can be dressed up or down depending on the occasion. We saw the most searches in June, when customers had set aside their winter coats.’

5.Voice activated assistant: ‘Although only just launched, we’ve already seen strong sales of Google Home. This hands-free smart assistant uses voice activation so you can ask it questions, and tell it to do things – whether that’s setting alarms, adding to your shopping list or controlling your thermostat. It can even tell the difference between your voice and other family members.’

Colour of the year: ‘Since January, Pinterest has been awash with the muted blush hue known as Millennial Pink. This dusky shade of pink exploded onto social media feeds to inspire home purchases and fashion, with searches for ‘pink’ peaking sharply in early July. Bedroom accessories in this shade saw a 28% increase in sales.’

Emblem of the year: The mythical unicorn was the icon of the year, with searches increasing 70% compared with last year on JohnLewis.com. Unicorns were emblazoned on everything from napkins to necklaces and wallets to water bottles.

Here are the top seven products that fell out of favour with John Lewis shoppers (with comments from the retailer):

1. Sat nav: ‘With built-in sat navs and smartphones taking the driving seat when it comes to getting from A to B, we plan to remove these devices from our stock list.’

2. Spiralizer: ‘The spiralizing craze of two years ago has fizzled out, with online searches down by 53% and sales declining by 40% compared with last year.’

3. eReader: ‘It appears you can’t beat a good old-fashioned book; searches for eReaders declined by 33% compared with last year and sales were down by 23%.’

4. Analogue radio: ‘In the next few years the UK will officially switch off the FM radio signal and move to digital radio. In anticipation, customers are tuning out of analogue radios.’

5. Office suits for women: ‘For ladies, the traditional office suit is becoming a thing of the past, with matching suit jackets and skirts seeing a 10% decline.’

7. Cummerbund: ‘Men still dress up for formal occasions, with strong sales of bow ties over the last 12 months. However, the cummerbund is being consigned to the fashion archives, with demand dropping 21% in the last five years.’

Share
Previous New cookware from Hestan at Bentalls
Next Deadline to enter The Housewares Innovation Awards 2018 closes on Monday!

The world hasn’t been able to travel for the best part of a year. We’ve …