Footfall returns to high street in May 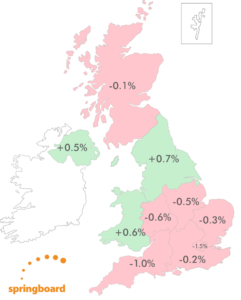 UK retail footfall fell in May by 0.4% on the previous year – a marked improvement over March and April, which recorded declines of 6% and 3.3% respectively, according to the BRC (British Retail Consortium)-Springboard’s monthly monitor.

“However,” BRC-Springboard, noted, “footfall was still down, despite May being a great month for sales (due to weather and following a poor comparable from last year) and in-store sales recording growth for the first time in two years.”

In the four weeks from April 29 to May 26, retail parks saw growth of 0.5% and high streets of enjoyed a rise of 0.6% – but shopping centres continued to see significant year-on-year declines, posting a fall of 2.9%.

Springboard Marketing and Insights Director Diane Wehrle said: “It would be highly premature to regard the improvement in UK footfall to -0.4% in May from a drop of -3.3% in April as any form of bounce-back. Instead, at least in part, it’s likely to be a consequence of shopping trips being deferred from April (when the weather continued to be cold and wet) into May. It might also be regarded as a reflection of consumer demand resulting from the two May bank holidays, which anchored the month at both ends. In reality, however, footfall actually declined in both bank holiday weeks, reflecting a long term trend identified by Springboard of the lessening in importance of public holidays for retail.

“The greater truth is that with footfall post-5pm continuing to outperform activity during retail trading hours, the overriding characteristic of customer behaviour is firmly one of ‘experience over product’. In May, footfall between 9am and 5pm declined by -1.2% whilst rising by +2% post-5pm. The variance between the two parts of the day is most significant in shopping centres, where daytime footfall dropped by -3.6% compared with a rise of +0.4% post-5pm.

“Although the post-5pm period is still less significant in terms of the volume of activity, the ongoing drop in daytime footfall means that the number of customers visiting bricks-and-mortar stores will continue to diminish, leaving the onus on retailers to better exploit a reduced store customer base in order to drive sales growth.”

“Consumer behaviour is changing and retailers are continuing to adapt their stores to their customers’ requirements by investing in the integration of their online and bricks-and-mortar businesses, increasingly allowing customers to pick up in-store items purchased online.

“Policy makers can help to ease the pressure on both retailers and high streets by addressing the burden of business rates and adapting planning laws to support the successful reinvention of empty retail space.”