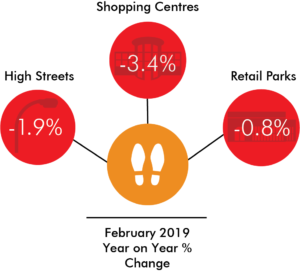 Retail footfall fell by 2.0% last month – a significant decline compared to the previous year where it fell by 0.2%. This is the fifteenth month of consecutive decline and the weakest February in five years.

The latest figures from the British Retail Consortium (BRC) and Springboard, covering the four weeks from January 27 to February 23, show high street footfall declined by 1.9%, marking seven consecutive months of weakening for this shopping location. This was a deeper decline than the previous year when footfall fell by 1.2%.

Retail parks footfall declined by 0.8% – a sharp decline on last year when it grew by 1.4%. The East Midlands and Wales experienced notable growth in this shopping location of 3.0% and 1.4% respectively.

Shopping centre footfall declined by 3.4% – a deeper decline than last year’s fall of 0.9%. No region experienced growth in this shopping location in February.

BRC chief executive Helen Dickinson OBE said: “Consumers have been cautious in their spending, leading to the biggest drop in February footfall for five years. These figures echo the month’s poor retail sales figures which saw weak growth, particularly in bricks-and-mortar stores. While real incomes have been rising over the last year, the uncertainty surrounding Brexit appears to be driving a ‘needs-not-wants’ approach to shopping.

“Things could get a lot worse unless the Government is able to avoid a calamitous no deal Brexit. Such a scenario would likely result in higher costs, higher prices and less choice for consumers – all of which would further harm struggling retailers. The Government must act to protect both consumers and retailers by ensuring there is no chance of a no deal Brexit.”

Springboard marketing and insights director Diane Wehrle added: “The -2% drop in footfall in February – a significant worsening from -0.5% in February 2018 – occurred despite the fact that February this year was the hottest on record.

“However, the record temperatures only occurred in the final week of the month, when footfall rose by +2.5% compared with drops in each of the preceding three weeks, averaging -3.6%. Indeed, the balmy conditions certainly helped high streets where footfall rose by +4.5% in the last week of the month compared with an average drop of -4.1% in the preceding three weeks.

“In all but two areas, the drop was greater than -2%, with a fall of just -1.4% in Greater London. The result for London will in part have been due to Chinese New Year occurring in February this year, but it is actually not an unusual outcome as footfall in Greater London is generally the last to decline and the first to recover due to the diversity of its economy and sheer volume of activity.

“What would have seemed highly unlikely this time last year is that there was a more modest decline in footfall during daytime hours of -1.5% compared with -3.3% post-5pm. To some degree this will have been a consequence of the cost of evening dining, which typically is higher than lunch. But the warm weather, during what was half term week in many areas, will have also increased the appeal of daytime trips for which evening trips will have been sacrificed.”