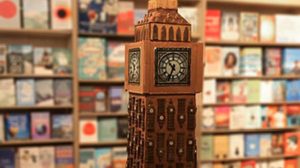 The broadcaster said: ‘This series unveils the work of an elite group of chocolatiers, who go all out to produce the world’s most breath-taking chocolate creations.

‘The talented chocolate makers that feature in the series will be designing and producing a range of ambitious, intricate and mouth-watering delights which include a 3D chocolate map of Croatia commissioned by the Croatian Embassy; a chocolate record player complete with chocolate headphones, microphone and record collection; a 4.5ft Big Ben; and even exact replicas of an endangered dung beetle for an Oxford entomologist.’

The series, which is narrated by comedian, actor and presenter Rufus Hound, follows the success of ‘Extreme Cake Makers’, which won ‘Best Daytime Series’ at the Broadcast Awards 2018 and has been sold to 60 territories including Australia, New Zealand, Canada and the US.

Both shows are made by factual entertainment company Boomerang, based in Cardiff. Boomerang director of programmes Sam Grace commented: “We are delighted to announce this brand new series coming soon to Channel 4. Following the success of ‘Extreme Cake Makers’, we know there is a huge appetite and passion out there for creations that are truly jaw-dropping and spectacular.”

‘Extreme Cake Makers’ also returns to Channel 4 for a fourth series this Spring.