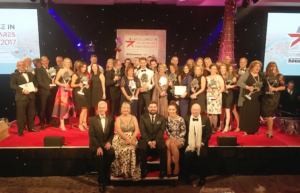 The winners of the Excellence in Housewares Awards 2017 were announced last night (Wednesday October 4) during a ceremony at the Royal Lancaster Hotel in London.

Some 400 housewares retailers and suppliers attended the event, which was organised by ‘Progressive Housewares’ magazine in conjunction with the CHA (Cookshop & Housewares Association) division of bira (British Independent Retailers Association).

Welcoming guests, bira ceo Alan Hawkins summed up the housewares industry’s key strengths: “It is driven by innovative products, which try to make consumers’ lives easier, as well as bring smiles to their faces,” he said. “Retailers in this industry go above and beyond for their customers – and they are genuinely passionate about what they sell.” The grand finale was the presentation of the Honorary Achievement Award to Ben Phillips, director and owner of 42-strong specialist chain Steamer Trading Cookshop.

‘Progressive Housewares’ editorial director and co-owner Jakki Brown said Ben had steered the business to become “one of the UK’s leading retail gems, inspiring and exciting consumers with a vibrant offering, presented in world-beating store environments – which are invariably ambitious sites that ooze character and style”.

Retail Employee of the Year: Alison Hobbs, visual merchandiser of Potters Cookshop at Hockley in Essex

Most Promising Newcomer: Prep Cookshop of Stoke Newington in London

Excellence in Retail Initiative Harts of Stur for its ‘Kitchen’ magazine

Top of the Table Epicurean Melamine Tableware from Eddingtons

Share
Previous The sixth baker leaves the tent
Next Lakeland’s turnover tumbles by 6.5%