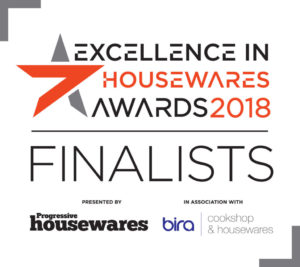 The roll-call of retailers who have reached the finals of the Excellence in Housewares Awards 2018 has been announced.

Organised by trade magazine ‘Progressive Housewares’ in conjunction with the Cookshop & Housewares (CHA) division of trade body bira (British Independent Retailers Association), the awards recognise and reward the achievements of UK housewares retailers and products over the past year. The product award finalists will be announced later this month.

The winners will be revealed at an awards ceremony in London on October 3. One lucky winner will also become the gia (Global Innovation Award) national winner for 2018/2019 and will represent the UK at the gia gala, which is held in March during the 2019 International Home + Housewares Show in Chicago.