England set to be world champions – in the beer stakes, says Tesco

19th June 2018 News Comments Off on England set to be world champions – in the beer stakes, says Tesco 1,597 Views 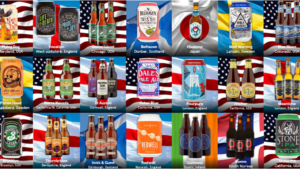 With the World Cup under way, Tesco predicts that England are set to become world champions – when it comes to beer sales.

The supermarket chain claims that of the countries competing in the football tournament, English lagers, ales and craft beers are so popular that they dwarf the beer retail sales of their footballing rivals.

England’s closest beer competitor nation is Mexico (with the combination of heavyweight players such as Corona Extra, Sol and Desperados) while Spain (with star performers San Miguel and Estrella Damm) takes third place.

“However, despite Brits remaining patriotic in their beer tastes, during major football tournaments we always see a sharp rise in demand for beers from all around the world. Great examples of that from the last World Cup are Polish Tyskie, German wheat beers such as Erdinger and Franziskaner and Belgium’s Leffe and Duvel.”

Latest data from the grocer shows that demand for craft beer at Tesco has soared by 200% since the last World Cup, while world beers jumped by more than 40% in the same time period.

Luke added: “During the last few World Cups and Euro football competitions we’ve seen a trend for people buying beers involving different nations in key games. So if Germany played Belgium, we would see sales of Stella and Erdinger soar. For this tournament, we’ve got a fantastic selection of beers from around the world to make sure that fans from many different nations can drink to the success of their team.”

The top eight World Cup participating countries for beer sales at Tesco are: