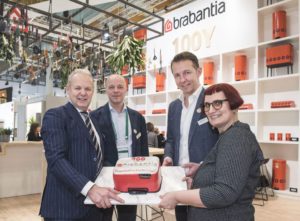 Housewares suppliers Brabantia and KitchenAid were among 11 companies celebrating anniversaries at the five-day German trade show Ambiente in Frankfurt, which closed on Tuesday (February 12).

Ambiente vice president Nicolette Naumann commented: “It’s a remarkable achievement when a company has been in the market for such a long time. Our exhibitors have been successful for many years now, so we wanted to celebrate with them in person.”

Each company was given a surprise gift by Nicolette’s team at their stand of a personalised cake or bottle of champagne. Master pastry chefs from Frankfurt were tasked with creating the cakes so that each company’s baked treat was instantly recognisable, with designs based on current product lines and logos.

The next Ambiente will be held from February 7 to February 11 2020.

Brabantia celebrated its centenary at Ambiente