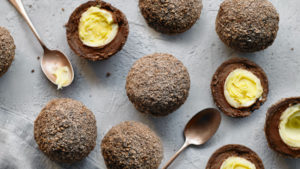 Total sales excluding fuel were down by 0.5% at Waitrose & Partners last week (to Saturday March 16) compared with the same period in 2018, when the run-up to Easter – which fell earlier last year – had already started.

“And although it is still three weeks away, Easter sales have already delivered strong results and are expected to be even higher in the coming weeks as the date approaches. Waitrose Chocolate Avocado Easter eggs and Heston from Waitrose Chocolate Scotch eggs continue to be top sellers.”

Created by celebrity chef and Waitrose ambassador Heston Blumenthal, the Heston from Waitrose The Chocolate Scotch Egg (pictured) looks from the outside to be a traditional summer savoury favourite. But inside, a mango and yuzu fondant yolk is encased in a smoked milk chocolate caramel ganache in the shape of an egg and coated with milk chocolate, maple-crunch breadcrumbs.

Heston said: “In previous years we’ve taken the idea of the typical chocolate egg and reinvented it with an unexpected twist. This year, my Scotch egg does this in a way you wouldn’t expect – sparking the imagination as you cut into it to find a curious surprise.”

Jo added that Waitrose continued its commitment to sourcing British last week, announcing that from this month it will be stocking berries that were grown and harvested in the UK during the Winter. Typically available from May, this development has been made possible by new growth innovations trialled by Waitrose and its suppliers in glasshouses that mimic the British summer.