‘Drowning in Plastic’ airs tonight on BBC One

1st October 2018 News Comments Off on ‘Drowning in Plastic’ airs tonight on BBC One 2,277 Views 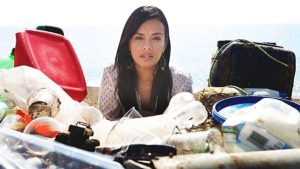 A year on from ‘Blue Planet II’, BBC One is airing a film tonight (Monday October 1) at 8.30pm that will investigate the consequences of the plastic pollution crisis in our oceans.

The broadcaster said ‘Drowning In Plastic’ ‘picks up where ‘Blue Planet II’ left off, to explore the impact that plastic has on our marine environment, and the wider ramifications that our throwaway culture has had on the creatures that share our planet.

‘Wildlife biologist Liz Bonnin will take audiences on a journey to look at the dangers and struggles of our marine wildlife, and the sheer extent of the problem that now faces us as our seas increasingly become choked up.

‘Around the globe every minute, we buy a million plastic bottles, a million disposable cups and two million plastic bags. Across the world, only 11% of plastic is recycled. Currently the focus is still on producing new plastic rather than recycling it; if attitudes don’t change, it’s estimated that annual plastic production in 2050 will have increased by 500%.

‘With food packaging making up over a third of all plastic waste in the ocean, Liz also meets an entrepreneur aiming to revolutionise food packaging by offering an alternative, made of biodegradable seaweed that would go a long way in trying to help prevent the estimated eight million tonnes of plastic from entering our oceans each year.’

BBC One head of commissioning, natural history & specialist factual Tom McDonald said: “’Blue Planet II’ had an extraordinary impact in raising awareness of the threat of plastics to our oceans. This powerful and emotional 90-minute special signals our continued commitment to exploring the challenges facing the natural world and bringing our audience the very latest research from the field on this incredibly important subject.”

‘Drowning In Plastic’ is repeated on Wednesday (October 3) at 11.15pm.