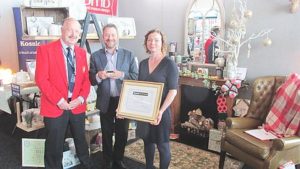 The awards were judged by an independent panel. and presented by David Adams, chairman of Home Hardware. He said “DMD had an extremely eye-catching stand. Their products were very well merchandised and the judges liked the use of themed fireside props to emphasise the products.”

A total of 135 exhibitors attended the one-day event, which was held last Tuesday (September 19) at the Silverstone motor racing circuit in Northamptonshire.

Home Hardware is a dealer-owned wholesaler and buying group, which is the largest voluntary organisation of its kind in the UK. It is owned by its retail members, which comprise 450-plus independent hardware retailers, housewares shops, cookshops, ironmongers and garden centres.

The award-winning business is headquartered in north Devon, with two warehouses in Barnstaple and Bedford. Members receive marketing support including six seasonal promotional leaflets and catalogues as a spring and autumn trade shows.