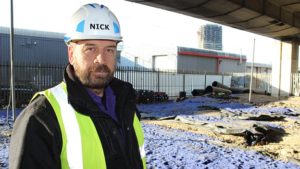 BBC One’s flagship renovation programme DIY SOS is starting to build a multi-use community space and boxing club for the Grenfell community – and is calling for volunteers and donations of building supplies and interiors for the project.

The new space will be available to the whole community to use for a range of activities. A new custom-made gym for the Dale Youth Boxing Club, which was previously housed in the first floor of Grenfell Tower (and has been temporarily based in a car park), will also be built. Both buildings will be constructed on a site under the A40 Westway.

Graham Gater, chairman of the Dale Youth Boxing Club, said: “After the Grenfell Tower fire the club was, in boxing terms, knocked down. But thanks to BBC DIY SOS and all the people who are volunteering and donating we are now able to beat the count, through their generous and immensely inspirational support. We are really looking forward to getting a new space.”

The DIY SOS team will work closely with local residents, including those on the Lancaster West Estate, and Westway Trust, the charity that owns the land and will help manage the new buildings.

BBC Head of Commissioning, Popular Factual and Factual Entertainment David Brindley, said: “This will be one of DIY SOS’ most important builds. It’s great news that the team have been able to work with the local community to find a site and a design that will leave a lasting legacy for all to share. I’m delighted we’re able to share the story of this ambitious undertaking on BBC One.”

The two-part special will be broadcast later this year.

The programme and this project rely on the generosity of building companies, suppliers and volunteers. The build also requires help with the interiors. If companies wish to donate products or get involved or work as volunteers, they should email diysos@bbc.co.uk. The proposals for the build are available to view online.

‘DIY SOS’ has been running for 17 years and attracts up to 5 million viewers per episode in its primetime slot on BBC One. The award-winning show is presented by Nick Knowles.