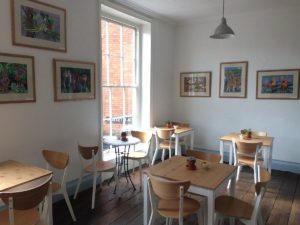 Independent retailer Dinghams has launched an in-store cafe at its Wiltshire cookshop in Salisbury.

Located upstairs at the front of the store, the 20-seater café is open from 9am to 5pm from Monday to Saturday. The menu offers cakes and hot and cold drinks and there are plans to start providing mezzes and light lunches.

Dinghams is also in the process of getting an alcohol licence, which will work well with a further plan: to organise supper clubs and open evenings. A coffee bar for downstairs is also on the agenda.

The housewares business has been run by the Hardingham family since 1982, and the new cafe is the idea of two of the younger members of the family: sisters Becca and Nicola Hardingham.

They told www.HousewaresLive.net: “There used to be a cafe here 12 years ago and we still had people coming in asking if it was open. That was a good sign that we needed to bring it back!

“Retail is increasingly becoming a tougher industry to be in, especially as an independent. So we felt that a good way to bring people in – and move the shop forward – was to create a fun and relaxing experience for the customer.” Although it’s early days, the cafe has had a great response already, they report.

Becca and Nicola have taken over running the Dinghams business from Ann Hardingham and her daughter Sarah, who are both “enjoying a well-deserved retirement”. They are granddaughters of Ann and nieces of Sarah, “so we’ve grown up with Dinghams,” they explain.

There is a second Dinghams cookshop, 25 miles away in the Hampshire town of Winchester, which opened in 1993. This branch does not have a cafe “and we have no plans to change that, as Winchester is doing quite well. We think this is because a lovely restaurant has opened next door, so that’s bringing more people to the street,” Becca and Nicola said.