Debenhams makes debut Down Under

29th October 2017 News Comments Off on Debenhams makes debut Down Under 1,666 Views 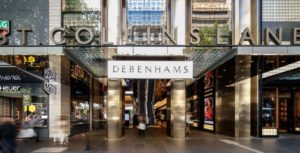 Debenhams extended its global footprint last week with the opening of its first store in Australia.

The outlet, which opened in Melbourne last Tuesday (October 24) is the department store group’s first site with franchise partner, Pepkor, part of the Steinhoff Group.

Measuring 3,600sq m across two floors, the shop is located in St Collins Lane which is billed as the city’s newest shopping destination for international brands. Other tenants include Reiss, TAG Heuer and Coach.

Debenhams said the store’s small-format layout is the first of its kind for the retailer and is ‘a notable shift away from the traditional department store format in Australia’.

The shop features a mix of clothing and products from the retailer’s portfolio of British designers including Jasper Conran, Julien Macdonald, Preen, Savannah Miller, Matthew Williamson and Jenny Packham. In-store services include a style suite, beauty rooms and a café.

Debenhams international managing director David Smith said: “International expansion in key markets is a strategic priority for our business. More than 20 million shoppers visit our 175 UK and Republic of Ireland stores each year and that includes a huge number of Australian consumers.

“Shoppers in Australia spend more than A$5.1 billion on fashion and A$8.0 billion on beauty products annually. Add that to the fact that we know that our offering resonates [with them], and the next logical step for the business was to open a store in Australia.”

Graham Dean, managing director of Debenhams Australia, added: “The opening of Debenhams St Collins Lane is an evolution of our success with the Australian market, with online sales to Australia already the largest outside of the UK.

“We have a track record of getting retail right – Debenhams St Collins Lane is not a traditional store, and we are confident in this new offering in a popular area of the Melbourne CBD [Central Business District].”

Share
Previous BHETA launches National Home Improvement Week
Next Is your Christmas tree up yet?