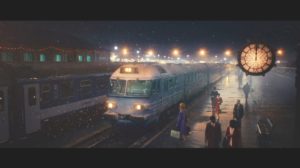 Debenhams has launched its 2017 Christmas campaign, ‘You Shall’, with a concept designed to ‘seduce shoppers with storytelling and inspire gift-givers on how to have a fairytale holiday season’.

The push kicked off last Monday (November 13) with a 20-second teaser TV ad telling the tale of a young woman who loses her shoe on a crowded train and the handsome stranger who finds it.

Viewers viewed the full 90-second execution online and on TV last Friday (November 17) during ITV’s ‘Gogglebox’. Audiences saw the woman and her shoe reunited, with a guest cameo appearance by Hollywood star Ewan McGregor, who plays a pivotal role in the fairytale ending. There are further chances to watch the ad this weekend (November 18-19) during primetime slots and on ITV, Channel 4, Sky, More4 and E4.

The department store group’s managing director of beauty and marketing Richard Cristofoli said: “Customers told us they expect to be entertained at Christmas. Building on our ‘FoundIt’ campaign of the past three years, ‘You Shall’ is a modern take on a classic fairytale with finding at its core. Our story is heart-warming and uplifting. The full campaign showcases our breadth of gifts for everyone.”

‘You Shall’ gift guides are also a key component of the plan with a two million print run featuring more than 1,000 gift ideas and. The guides are available in-store and will be bound into media titles including ‘Sunday Times Style’ and ‘The Mail on Sunday’. Party fashion and beauty guides are inserted into ‘Grazia’ and ‘Deck The Halls’ Home editions are bound into titles including ‘Ideal Home’, ‘Country Homes’, ‘House Beautiful’ and ‘Elle Decoration’.

In-store theatre has also been dialled up for 2017, with the transformation of shop floors into glittering ballrooms.

The concept is brought to life further with flagship stores gifting shoppers ‘as the clock strikes twelve’ (midday) in the run-up to Christmas. Items such as glass slipper decorations, gift cards and free coffee will be presented by staff granting ‘random acts of kindness’.

Food sampling and gift wrapping will also be on offer, alongside a new service proposition which sees 2,000 additional staff serving customers in the six weeks prior to Christmas.

‘Selfie’ stations are also be in situ, encouraging shoppers to capture and share their fairytale moment. Carrier bags will carry the campaign message too, alongside products such as baubles and cupcakes.

Debenhams’ army of 200 personal shoppers will become ‘You Shall Gift Finders’ for the season. Through an online reservation service, customers will be able to book an appointment and delegate their Christmas shopping to a trained staff member.

Professional theatre appearances are also scheduled to take place in stores across the country to give shoppers a ‘Fairytale Christmas’ experience.

Debenhams has teamed up with Cinderella pantomime productions in Birmingham, Liverpool, Dartford, Milton Keynes and Bradford, with appearances planned from characters in the shows as well as ticket giveaways and performances.

The hero item of the campaign – a crystal studded stiletto specially created by Debenhams Designer Jenny Packham – is a limited edition, each accompanied by a personalised signed card by the designer.

To watch the ad, visit https://youtu.be/fyNhzFYP3ts