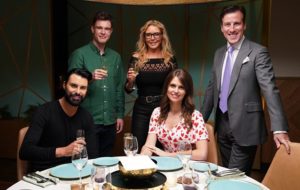 BBC Two has announced the transmission details for a new show in celebrities go out to dinner.

Described as a ‘brand new subversive comedy entertainment show’, the six-episode series features ‘an eclectic mix of five famous diners each week, with no host, no studio, but one BIG loser’.

The broadcaster explained: “When the celebrities arrive at the restaurant, they must each place their bank cards in the centre of the table. As the food is served and the drinks flow, they play a series of fun and revealing games. If they win a game, they can retrieve their card. The person whose card remains at the end of the evening must pick up the bill for the whole group.”

Kate Phillips, controller of BBC Entertainment Commissioning, said: “There’s nothing amusing about being stuck with the bill but luckily ‘I’ll Get This’ is a very funny watch, as we witness a unique set of well-known diners do whatever it takes to get their credit card back. Let the gourmet games begin!”