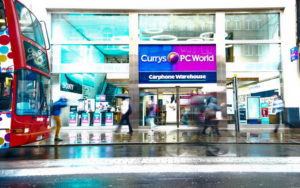 Currys PC World has revealed that the LG OLED TV was the best-selling TV in its Black Friday sale today (November 24), selling five times more than last year. Another big trend was voice controlled technology, with sales up 769% year-on-year.

The electrical retailer also revealed that kitchen appliances ‘went down a treat’ with shoppers. Small appliances such as food mixers sold ten times more than last year and rose gold kettles and toasters proved a hit. For large kitchen appliances, built-in remained a favourite with customers, with sales up 20% year-on-year.

Currys PC World e-commerce director Stuart Ramage said: “Customers made the most of our multichannel offering and free delivery on all orders, placing orders on their mobiles and either click and collecting from store or getting deliveries to their homes.

“This morning we saw TVs, smart tech and gaming consoles doing well and the trend for large screen TVs was big. This afternoon showed that kitchen appliances are also leading the way this year, as customers look to get geared up and ready to prepare their Christmas feasts.”