Cheese and Chinese meals on the menu for Waitrose shoppers

1st August 2017 News Comments Off on Cheese and Chinese meals on the menu for Waitrose shoppers 1,689 Views 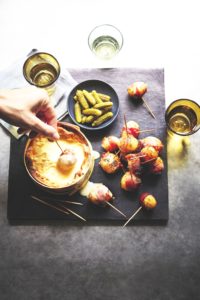 Reviewing the supermarket chain’s trading performance, commercial director Rupert Thomas said: “After our success at the International Cheese Awards, our speciality cheese sales were up 5.6%. Butters and spreads also had a strong week, with sales up 17%.”

The International Cheese Awards were held on July 25 and July 26 at Nantwich in Cheshire. The event is billed as the biggest and best cheese show in the world.

Waitrose was crowned Supreme Retailer for 2017 after garnering the most Gold Awards at the show. The retailer picked up 24 Gold awards across all classes as well as winning Speciality Cheese Retailer of the year.

Morrisons came in second with 18 golds, and also triumphed as Cheddar Cheese Retailer of the year.

Rupert added: “Changeable weather helped contribute to an uplift in sales of hot pies and roast poultry, which rose by 24% and 7% respectively.

“Convenient options were also on the menu, with Chinese ready meals up 30% and Indian ready meal sales growing by 25%.”

Waitrose operates 354 shops in England, Scotland, Wales and the Channel Islands, including 64 convenience branches, and another 27 shops at Welcome Break locations.